LRF ELECTRONICS SALES & SERVICE
Reach out to us for sales and service! 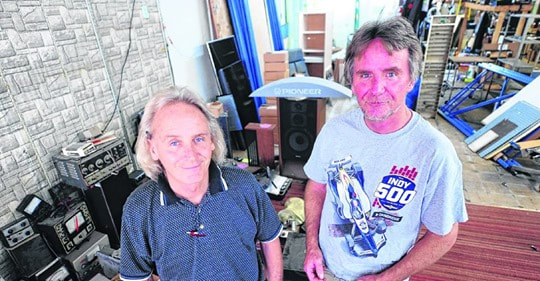 7/31/19 8:04 PM GREENFIELD — An electronics repair and installation business has unplugged from its downtown Greenfield storefront after a half century, but it’s not powering down for good

As of today, LRF Electronics no longer is open at 28 S. State St.
Brothers Louis and James Faenzi run the company. For decades, they have handled electronics repair, home theater installations, vehicle stereo work and more out of the storefront across State Street from the courthouse. They specialized home entertainment and also repaired computers.
“Just a little bit of everything electronics-wise,” James said.

Now, like many retailers, they will see how business goes online while they look for a new location that will allow them to save on rent. While LRF is no longer downtown, it’s still available at lrfelectronics.net and at 317-462-2272.  For years, Pete’s TV operated out of storefront. The Faenzi brothers’ father, the late Louis Faenzi Sr., took over the service end at Pete’s in 1969. He bought the business in the early 1980s and renamed it after his initials.

James has worked there for 38 years, and it’s the second job he’s ever had. Louis has worked there for 40 years.
James enjoys being his own boss. “You’re not working for anybody; you’re working for yourself,” he said.  He likes the nature of the work too, especially with how rapidly electronics change and how far the industry has come from the days when televisions still had tubes in them, he said.
James also enjoys meeting customers and solving problems.  Louis agreed.  “Change is always good on the job,” he said, pointing out how home entertainment has evolved from TV to VHS to DVD to streaming.

When Louis started out, he’d take the backs off TVs, dust their chassis, check tubes and mark tubes with tape indicating whether they were good or bad so his father would have a head start when he took over the job.  The brothers studied electronics in school, but it doesn’t compare to on-the-job training, James said.  “You learn more with hands-on experience,” James said. “You learn the theory at school, but you learn the hands-on in the field.”  Louis said they’ve kept up with all of the changes that have occurred in the electronics industry over the decades by attending shows manufacturers put on featuring their new products and how they work.  Just as the hardware has changed, so too have ways of doing business, he said.  “I understand business has to move on,” Louis said. “The space we have is a prime area. What we do isn’t as prime as it used to be. I understand the changing of the guard.”

LRF’s future will come with pros like less hours, Louis said, and cons like less personal interaction with customers.  Their cleanup of the store illustrates how much electronics have changed, too, James said. He added he’s found old calculators with handles on their sides and estimated they collected 30 to 40 pieces of testing equipment dating back to the 1950s.

Both are grateful to the city LRF has called home for the past 50 years.  “It’s been great to be in Greenfield,” James said.